LAOAG CITY, March 16 – Among the 81 provinces of the country, Ilocos Norte may be the first to have honored more homegrown heroes through the years.

The newly-unveiled shrines include Pedro Bukaneg, father of Ilocano literature; Pedro Mateo and Saralogo Ambaristo, leaders of the Basi Revolt 1807; Valentin Diaz, treasurer and co-founder of the Katipunan; and Jacinto Caoili, poet and author of famous literary works such as ‘Pasyon’ and ‘Urbana at Felisa”.

The first batch in the Ilocano Heroes Shrine was inaugurated in December 2013 during the celebration of the Tan-ok ni Ilocano Festival of Festivals.

Catanduanes promotes eco-tourism with “One Tourist, One Tree” program

The province of Catanduanes has adopted a new local tourism promotion program that gives tourists the privilege of taking part in tree planting during their stay. Dubbed as “One Tourist, One Tree,” the recently launched program is directed towards making the local tourism industry an avenue for keeping the verdant […]

CLARK AIR BASE, PAMPANGA, Nov. 28 — A deep-throated roar in the sky heralded the arrival of the country’s first two FA-50PHs and return of the supersonic capability of the Philippine Air Force (PAF) Saturday morning. The two aircraft, with tail numbers OO1 and 002, landed at Clark Air Base, […]

Data from NASA’s Hubble Space Telescope and ground observation paved the way for discovery by astronomers in finding a monster black hole lurking inside one of the tiniest galaxies ever known. The black hole is five times the mass of the one at the center of our Milky Way galaxy. […]

PALO, Leyte, Jan. 17 — Stormy weather cuts Pope Francis visit in Leyte, skipping lunch with disaster survivors. The pontiff arrived at the Archbishop Residence around 11:40 a.m., but went down around 12:10 p.m., skipping the meal and briefly blessed the Pope Francis Center for the Poor before heading to […]

The Race to Malacanang opens, campaign season begins. Happening now are the opening salvo of all five presidential, vice presidential and senatorial teams and candidates for the May 9, 2016 elections. Five separate proclamation rallies are being held on strategic places around the country, also based on political preference and […] 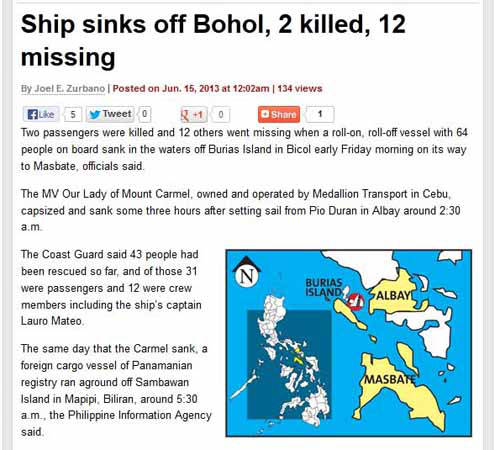 It isn’t funny anymore with the not-once-in-a-blue-moon errors of national dailies on news coverages which detail events outside Manila. This time, have you noticed the news from Manila Standard Today about the “Ship sinks off Bohol, 2 killed, 12 missing” posted on Jun. 15, 2013 at 12:02am and bylined by […]

MANILA, Feb. — Like a copy of gas service retail and store outlets in western countries, two investors are up to show the motorists and travelers in the Philippines the look and feel of one. That is, fill your car with gas, shop a little, eat some snacks and buy […]

Do not get surprised when in the next few decades from now another mind-boggling political gerrymandering stirs anew the Bicol region. This time it will emanate from the land of the cowboys, the province of Masbate. We will be reading an unfolding development on these, hence: Burias and Ticao islands […]

MANILA, Nov 16 — Brace for the effect or impact on the Philippine banking system now that the Monetary Board has approved the implementing rules and regulations of Republic Act No. 10641. The law which amends R.A. No. 7721 which was passed way back in May 1994 opens the gate […]

Afar and in our viewing safety, the string tornado that formed and hit a portion somewhere in the vicinity of Legazpi city at about 4 PM yesterday looked spectacular and amazing. But it gave me goose bumps. While I don’t have any info on what definite spot of the province […]

Discover Nora Aunor in her “Kinabukasan”

This is the 2018 Cbanga360 inMotion channel trailer for YouTube. Thanks for stopping by. Always appreciate your joining this channel in its post by post journey as it covers short- ish random topics. From time to time, it may present unboxing of electronics and gadgets primarily for use in the […]

NAIVASHA, Kenya, Dec. 12 — At least 33 people have been confirmed dead and several others injured after an oil tanker crashed into other vehicles and burst into flames in Naivasha, about 90 km northwest of Kenya, disaster officials said on Sunday. Pius Masai, deputy director of the National Disaster […]

Manila — The policy-making Monetary Board of the Bangko Sentral ng Pilipinas has cancelled the Certificate of Registration of Philrem Services Corp., the remittance service provider facing lawsuits for alleged involvement in the laundering of about US $81 million stolen from Bangladesh Bank in February 2016. The board also cancelled […]

LEGAZPI CITY — The regional office here of the environment and natural resources department has made a commitment of providing mangrove propagules for the towns of Donsol, Pilar, Casiguran, Magallanes and Sorsogon city. Learning from the sad experience of the Visayas regions that were badly ravaged by the storm surge, […]

Three public activities are lined up on the official second day of apostolic visit of Pope Francis in Mexico. A welcome ceremony for the visiting pope hosted by President Enrique Peña Nieto will be held at the official residence of the head of state, the National Palace. It is also […]

Street families, indigenous people and victims of disaster belonging to 203 families are the first batch of beneficiaries of the Modified Conditional Cash Transfer of the Department of Social Welfare and Development who received prepaid cards of the Land Bank of the Philippines. Through the prepaid cards, beneficiaries of MCCT […]