Yes. it is 100% verified, not true. False rating that Philippine President Rodrigo Roa Duterte got an invite to visit Covid-19 plagued Beijing from Chinese President Xi Jinping. It is also 100% false that Duterte ever mentioned jet skiing to Wuhan, peeing in Beijing and eat coronavirus, even as a joke.

In fact, President Xi will not invite the septuagenrian leader since the pandemic threat of Covid19 more likely infect persons aged like Duterte’s and very susciptible to coronavirus.

The Chinese communist strongman would rather advise Duterte to stay in his room in Davao City inside his famous mosquito net (kulambo).

During the height of Taal volcano rumblings, Duterte did came out with a bravado that he will eat the ash from the eruption and pee on the volcano. That was nothing but an old man trying to steal the frontpage news. His boast was a dud.

While it was true that Duterte once boasted of riding a jetski to the West Philippine Sea and confront the Chinese’s island-grabbing, he never fulfilled that boast.

And that was also the false fulfillment of Duterte’s talk of jet skiing to the Philippine Rise. A team of jet skiers led by his son Baste was at Casiguran bay in Quezon province, far from the Benham Rise site.

MANILA – The country’s flag carrier Philippine Airlines and the Department of Budget and Management’s Procurement Service signed on Tuesday a general fares agreement on domestic travel for an initial 23 national government agencies. The agreement covers only official domestic trips of government officials, employees and personnel which will get […]

The series of frames here shows the deplorable and severe aftermath of tropical storm Ketsana, local name Ondoy, which caused flooding to a vast area in the national capital region and neighboring provinces due to the unabated torrential rain and wind.

The typhoon entered the eastern side of the big island of Luzon and made landfall between the provinces of Aurora and Quezon, even as rain started pouring earlier on Friday evening.

Legal counsel quits on Senator Bong Revilla MANILA, Feb. 12 — The lead counsel of detained Sen. Ramon “Bong” Revilla had formally severed his legal relations with the senator in a two-page document submitted to the anti-graft court reveals Thursday. Lawyer Joel Bodegon, in his manifestation sent to the Sandiganbayan […]

What were you doing when the Google Street View guy came?

What were you doing when the Google Street View guy came? This time now you must be aware that Google map has recorded the public view of streets of cities and towns, big or small, in the Philippines, including that of Calabanga. Last year sometime in June a Google Street […]

NAIROBI, Feb. 24 — The African Union on Monday urged the continent’s governments to embrace the use of science in order to transform its agricultural sector. Union Commissioner for Rural Economy and Agriculture Rhoda Peace Tumusiime told an agricultural forum in Nairobi that all known advances in humanity are based […]

Watch Replay: Senate Hearing on ‘Laglag Bala’ scam: The insensitivity and cluelessness of government officials, the hopeless, aggrieved state of Overseas Filipino Workers and NAIA visitors. For the general information of people following the tele-serye on ‘Laglag Bala’ or ‘Tanim Bala’ or ‘Drop Bullet’ scam hounding the visitors and passengers […]

If we are to read between the maps, Panatag Shoal or its traditional English name of Scarborough Shoal is not in China’s front yard. This according to Google which recently updated the mostly popular online reference map and removed the counterpart Chinese name (characters) on its site when browsing on […]

Malacanang has formed a task force to advance the country’s national interests in the disputed West Philippine Sea which will be under the chairmanship of National Security Adviser Cesar Garcia Jr. The task force will handle planning and synchronizing the employment of the different national government agencies’ capabilities to achieve […]

Which of the two groups can’t have enough of former Presidentt Cory Aquino nostalgia? The Filipino people in general, or the present government officials simply sucking it through the current Aquino administration? Just as it was noted that a boulevard in Camarines Norte will get its name after the Cory, […] 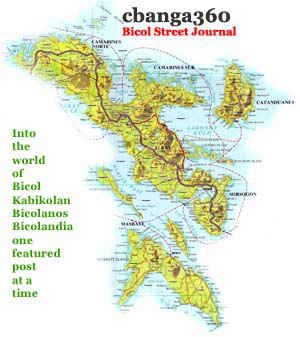 After Election, Now What? It is Payback Time in Bicol!

The day after the mid-term elections, expect things will be back to same old same old. (Tulad ng dati.) The poor remains poor. Some neighbors at the back house had an appointed chance of getting “dole-out moneys” from candidates’ crisp peso notes with the smiley face of a Ninoy are […]

Happy Holidays Happy New Year from us to you all!!

Happy Holidays, Happy New Year, to all our readers, the few followers and friends of this site and our social media pages. Advisory: After April 21, 2018, we stopped posting links on two of our OLD facebook pages. The first one is thebulletintoday (dot) com page. This originally links to […]

For lack of proper monitoring standard, an official of DepEd Bicol summarily said there were no major problems met on the first day of school in various provinces and cities of the region. Spokesperson Mayflor Jumamil said the education department had prepared for “Balik Eskwela” this school year with 973 […]

The campaign promises start to pour. It all began yesterday. We heard the candidates talk, fast talk about what they intend to do, the promises each will leave in every campaign podium around the country, just before election day of May 9, 2016. To our readers, you can play with […]

The second live stream test covers a peaceful massive rally of US President Donald Trump in Erie, Pennsylvania. The pressure took hold of most of our nerve. On this livestream test episode, tbere was a lull of about 46 or so minutes (so this post has been prepositioned to start […]